Martha Stewart, blissed out on CBD, is doing just fine 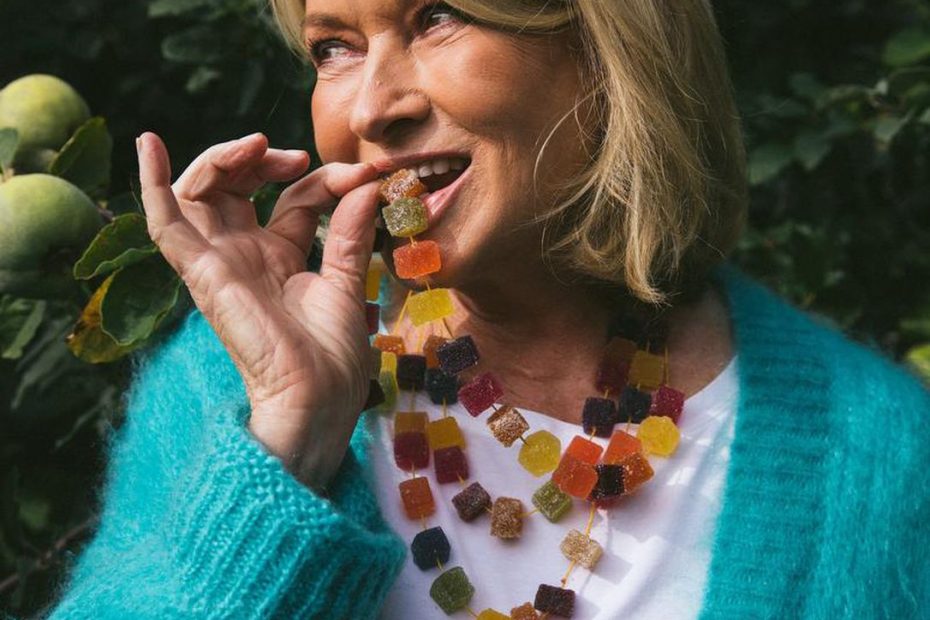 “Have you tasted them yet?” Martha Stewart asked. She was standing in her kitchen in Bedford, New York, speaking over Zoom about her new line of CBD pâte de fruit, the pronunciation of which she sounded out as if speaking to a child.

Eyeing the assortment in front of me, I picked a saffron-colored piece the size of a sugar cube and bit it in half.

It tasted sweet, squishy and grainy, indistinguishable from those granulated sugar-covered confections that fancy French restaurants dole out at the end of a meal.

“It depends on who you are,” Stewart said, shrugging. “I pop 20 of them and just feel OK, but some of my friends do two and feel high, I don’t know why. It’s not high like a marijuana high. It’s a CBD high, like, relaxed.” (Cannabidiol, or CBD, is a hemp-derived compound that shouldn’t get you high, but if you mix it with more potent stuff, good luck.)

She reached for an indigo cube, one of four gummies she would consume in the course of an hour-long interview. “You don’t think that you’re eating anything but pâte de fruit,” she said. “I’m having a black raspberry right now.”

In the world of the 79-year-old goddess of domesticity, cannabis, in its myriad forms, is a societal good. Her friend Snoop Dogg introduced her to its palliative effects at Comedy Central’s 2015 “Roast of Justin Bieber.”

“We sat next to each other for seven hours,” Stewart said. “Snoop must have smoked 10 giant fat blunts, and I inhaled all that smoke. I felt really good.” She paused, searching for a more eloquent description of that feeling; it came from a male voice off-camera belonging to Ryan McCallister, her gardener and, since March, her “cinematographer emeritus” (i.e., her Zoom lighting guy).

Her relationship with controlled substances was not always so. In the 1970s, she smoked a joint and went to a movie theatre in Westport, Connecticut, with Andrew Stewart, then her husband. “I tried to walk down the aisle,” she recalled. “I thought I would never get to the end of it. I never smoked again.”

What was the movie? “I have no idea what it was, or what it was supposed to be,” she said. “I just passed out in my seat.” She laughed and added: “My husband was probably angry.” (They divorced in 1990.)

For Martha Stewart, making the cannabis products, which she produced with the Canadian company Canopy Growth, and partaking in them is about keeping up with the times.

“I’m very interested in what is new and what is happening,” she said. “Like, I have an electric car. I have a Tesla. I adopted the computer before most of my friends — in 1982, I bought my first IBM. I’m an early adopter of a lot of things. That keeps you very on your toes, it keeps you extremely avant-garde, it keeps you current. I want to be current.”

“I have absolutely zero complaints about quarantine,” Stewart said. In March, she stopped commuting from Bedford to Manhattan, where she was designing a new office for her approximately 150 employees. (The Martha Stewart brand was acquired by Marquee Brands for a reported $215 million U.S. in 2019.)

She hunkered down on her 153-acre farm with an initial crew of three: McCallister, her housekeeper and her driver. She set up a temperature checkpoint and distributed face masks.

She wakes up, as she always has, around 4 a.m., beside her calico Persian cat, Empress Tang. (“I’m sleeping with an empress,” she said.) In bed, she reads three newspapers, does the New York Times crossword puzzle, “and the mini crossword puzzle and sometimes that stupid Vertex.”

Then she showers, gets dressed and goes to the gym, where she attempts to replicate aerobic and resistance routines that she used to do with a trainer. By 7 a.m., when her crew arrives — it numbers around a dozen, these days — she has written a to-do memo for the farmer, had a cappuccino and a green juice, and started her workday.

That could mean brainstorming ideas for her new HGTV show, promoting her QVC clothing line or writing the foreword for a friend’s book. “I’ve been working pretty much every day,” she said. “I really haven’t had a vacation yet. I’m looking forward to a vacation.” (Her next “real vacation” at the urging of her 8-year-old grandson, Truman, will be to Antarctica, the only continent he has not yet visited.)

She also creates content for the Martha Stewart Blog; her daily entries “show you how to do something,” she said, “like how to wash your cat or how to take care of your canaries.”

“Every morning, I play them a YouTube singing tutorial,” she said. “They have their own master class on how to sing.”

She does no more than three Zoom calls per day. “It requires sitting for an hour in the same place, and I don’t like that very much,” she said. “I get antsy.” Between Zooms, she might go for a swim, or ride her electric bike, or ride one of her Friesian horses, or cut hay — the farm has cut more than 1,000 bales of hay since March — or wander around and greet her many other farm animals.

“We have our chickens and peacocks and homing pigeons and geese and donkeys and what else do we have? That’s what we know about,” she said.

“I’m lucky,” she added. “I know how lucky I am. I, daily, think about everybody who doesn’t have all these amenities.”

One staff member is charged with calling Stewart 15 minutes before a Zoom meeting, “because sometimes I’m in the woods someplace and I have to rush back.” She has two computers set up for Zooms and chooses one “depending on where the light is nice. I don’t want to look terrible. I always try to have full light on my face, if possible, and you have to keep up your face, too. You have to look nice. That’s hard during COVID.”

Let us not forget that Stewart was locked down in far less plush confines in 2004 and 2005, when she spent five months at Alderson Federal Prison Camp in West Virginia after felony convictions of conspiracy, obstruction of justice and lying to investigators about why she sold 4,000 shares of ImClone stock. (The day after the sale, ImClone’s stock plummeted, leading to accusations of insider trading.)

That makes, say, cutting your own hair, as she has done in the pandemic, not such a big deal. (She did see her colourist before filming a week’s worth of “Chopped” episodes in August.)

“I haven’t been to the dermatologist, but my skin looks really good, and I think that has to do with CBD,” she said.

When dinnertime rolls around, “you either want to kill yourself because nobody’s there,” she said, “or, you know, you have somebody.” If she has company, she may indulge in a Martha-rita — a fresh fruit margarita whose name she coined in May.

“I have a rule that I do not drink alone,” Stewart said. “I don’t think I’ve ever poured a drink for myself alone in my house. I’m not like my friends who could have a glass of wine and feel nice about it, by themselves.” Her diet consists of “very little meat, lots of fish and lots of vegetables.” “I’ve lost a lot of weight during this time,” she said.

Generally, she wears gym tights and her own QVC clothing around the house. (“I’m amazed by the longevity,” she said.) Recently, for a rare, socially distanced, dinner out at a restaurant, she wore a long Eres gown.

“It’s actually a beach cover-up,” she said, “but it looks like a dress — very long and flowing, very beautiful. And some man said, ‘My gosh, I had no idea you looked so good.’” She giggled girlishly as she recounted the compliment. “I just felt so good when that happened.”

His comment echoes many of the thousands on an Instagram selfie Stewart posted from her East Hampton pool in July. The photograph inspired comparisons to Slim Aarons, that chronicler of wealthy, WASP-y poolside splendour; a pastiche of a post from Chelsea Handler; a plea from Stewart to Handler to not emulate her because she’s “too young” and trying too hard; and a not-insignificant number of think-pieces.

All Stewart has to say about it now is that she regrets not taking a picture when she catered a poolside lunch for Aarons many decades ago. “I’m going to go through my files and see why the heck I didn’t get a picture of Slim Aarons and myself,” she said. “But, yeah, I’ve had a lot of fun with social media this summer.”

Occasionally, she responds to critics, like a follower who called her tone-deaf for posting a photo of a lobster dinner she had while visiting her home in Seal Harbor, Maine. “We do not waste,” she wrote, in part. “We compost. We work. We give generously to many organizations. We care about the pandemic and observe healthy living and social distancing etc. and we wear masks we are good people.”

“They’re $3 a pound up in Maine,” she said of the lobsters. “Help the lobster farmers! Restaurants are closed, who’s buying the lobsters? You’d better buy some lobsters.”

On the subject of civic duty, asked whether she planned to publicly support a candidate in the 2020 presidential election, Stewart equivocated.

“You know, I have a magazine,” she said. “My personal conundrum is, my friends know who I am and what I stand for, but in terms of being the owner of the magazine” — as well as a number of consumer brands and media franchises — “how do you take sides when 50% of your readers might be on one side and 50% on the other? It’s difficult. That’s my answer to that.”

Stewart knows well her ability to sway public opinion and move product. She described the target demographic for her CBD line as “pretty much everybody. All my friends, every age, want them, including my daughter” — Alexis, 54 — “who doesn’t even eat sugar.” That she can render most anything aspirational is among her most enduring value propositions.

“Can we sell a lot of stuff because Martha put her name on it? That’s not necessarily the win,” said David Klein, the CEO of Canopy Growth. “The win is to build that authentic connection with the consumer base.” Still, there’s an alchemy to Stewart’s touch. She swirls it all together — her legacy, her lifestyle, our want to attain her level of success — and offers it up as a panacea to slurp down.