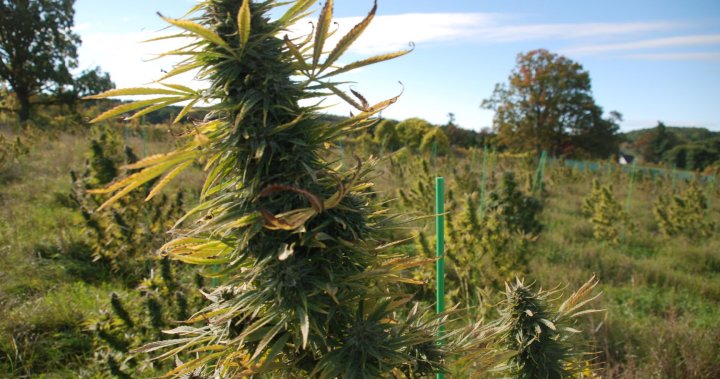 As part of an Ontario Provincial Police enforcement project tracking black market cannabis, investigators say they have uncovered sophisticated operations connected to organized crime and the exportation of marijuana to the United States.

“We see individuals coming in (and) buying up rich agricultural properties, properties with existing greenhouses, that make it easy for them to then turn them into these illegal cannabis production sites,” explained OPP Det.-Insp. Jim Walker, who is with the service’s organized crime enforcement bureau as well as the Provincial Joint Forces Cannabis Enforcement Team (PJFCET).

“It’s a profit-rich environment for organized crime to generate money and a revenue stream.”

Police said PJFCET has been active for two years and is responsible for enforcing the cannabis laws and investigating criminal enterprises that are exploiting or abusing the legal cannabis market. Since May, the task force has been involved in dozens of cases which have resulted in the seizure of millions of dollars worth of product and equipment used to grow, cultivate and distribute marijuana.

Despite closed borders, investigators said much of Canada’s illegal marijuana is being sent south and the proceeds then come back in the form of cash, firearms and other drugs.

“This is organized crime benefiting from the ability to make huge revenue streams through this commodity,” said Walker.

“What the public needs to know is when they are purchasing it from the illegal black market, their money is just facilitating other crimes.”

Officers said criminals are utilizing the Health Canada medical cannabis regime by exploiting people with Health Canada registrations and selling the product on the black market.

“What we’re seeing is more serious charges of marijuana possession or marijuana trafficking, large quantities and exporting of marijuana charges are coming through the courts system now, so what that means is people are sending marijuana overseas, into the U.S. and other counties,” explained Daniel Brown, the vice-president of the Criminal Lawyers’ Association.

“People who are selling and disturbing as if they have licences to sell marijuana when they simply don’t have that.”

Police busted a $42-million large-scale production and distribution network in August through “Project Woolwich,” a year-long investigation that resulted in several arrests of people in the Niagara Region and the Greater Toronto Area.

Investigators said they believe the accused people in this investigation were also responsible for large-volume shipments of illegal cannabis to Ontario from British Columbia.

“[The investigation] clearly highlights that the critical sharing of information can successfully lead to the dismantlement of criminal organizations in both countries.”

In all, 15 people were charged with 135 offences under the Cannabis Act, Controlled Drugs and Substances Act and the Criminal Code of Canada.

The OPP is expected to release more information about the cases the specialized unit has been working on in the coming days.