Biden said the Republican president is exacerbating social discord across the country, including by sending federal authorities into major cities under the pretence of addressing crime. And he said Trump has little interest in addressing the racism that Biden said has been laid bare by the COVID-19 pandemic, which disproportionately claims people of colour as its victims, or in an election-year reckoning with police violence against Black men.

“He can’t turn the economy around. He’s determined to stoke division and chaos,” Biden said, speaking in a community centre gymnasium in his hometown of Wilmington, Delaware. “It’s not good for the country, but Donald Trump doesn’t care. His campaign is failing and he’s looking for a lifeline.”

Many of his proposals — and the billions in federal spending needed to pay for it — had already been promised as part of previous, larger Biden plans to jump-start the economy when the coronavirus outbreak begins to recede. But as protests against institutional racism and police brutality have swept the country in recent months, the presumptive Democratic presidential nominee is attempting to show voters that he’s committed to implementing specific remedies that can promote racial and economic equality should he win the White House in November.

Biden’s speech and his subsequent question-and-answer session with reporters — just his third extended news conference in four months — comes as he nears a decision on a running mate. Biden came prepared a talk about at least one of the top contenders: California Sen. Kamala Harris.

1:44
Poll shows Biden has advantage with undecided voters over Trump in 2020 presidential race

A recent Politico story alleged that Biden’s longtime friend and vetting committee leader Chris Dodd, a former Democratic senator like Biden, had raised concerns about Harris going after Biden last June on the debate stage and showing “no remorse” in conversations with Biden’s campaign. On Biden’s notepad, he’d written below Harris’s name: “Do not hold grudges” and “Great respect for her.”

Biden did not field a question specifically about Harris. But he has praised her extensively, and he’s confirmed in recent weeks that his short list for vice-president includes several women of colour. His decision is expected to have unusual importance given his age, 77, and the fact that he’s a white man leading a diverse party.

Recent polls have shown Biden leading Trump nationally and in many competitive states that determine the Electoral College outcome. But Biden’s aides are keenly aware that Hillary Clinton lost key battleground states four years ago in part because of a drop in turnout among nonwhite voters from what President Barack Obama drew in 2012.

As part of his attacks on Trump’s approach to race, Biden blasted the president for ordering federal authorities to intervene against protests in places like Portland, Oregon, and Chicago, while small businesses around the country continue to struggle or shut down because of the coronavirus.

The president, Biden said, is trying to distract and scare voters. Biden said most demonstrators are “peaceful protesters” who don’t require a response from the federal government. “Arsonists and anarchists should be prosecuted,” Biden said, and “local law enforcement can do that.”

Still, Biden said “this election is not just about voting against Donald Trump. It’s about rising to this moment of crisis, understanding people’s struggle and building a future worthy of their courage and ambition to overcome.”

The former vice-president wants to take $30 billion, or 10 per cent of federal investment he’s already promised as part of larger economic plans, and funnel it into a “Small Business Opportunity Fund” designed to leverage $5 of private investment for minority owned enterprises for each $1 in public funds allocated. He also plans to spend $50 billion to provide startup capital that can help entrepreneurs of colour start businesses in disadvantaged areas. 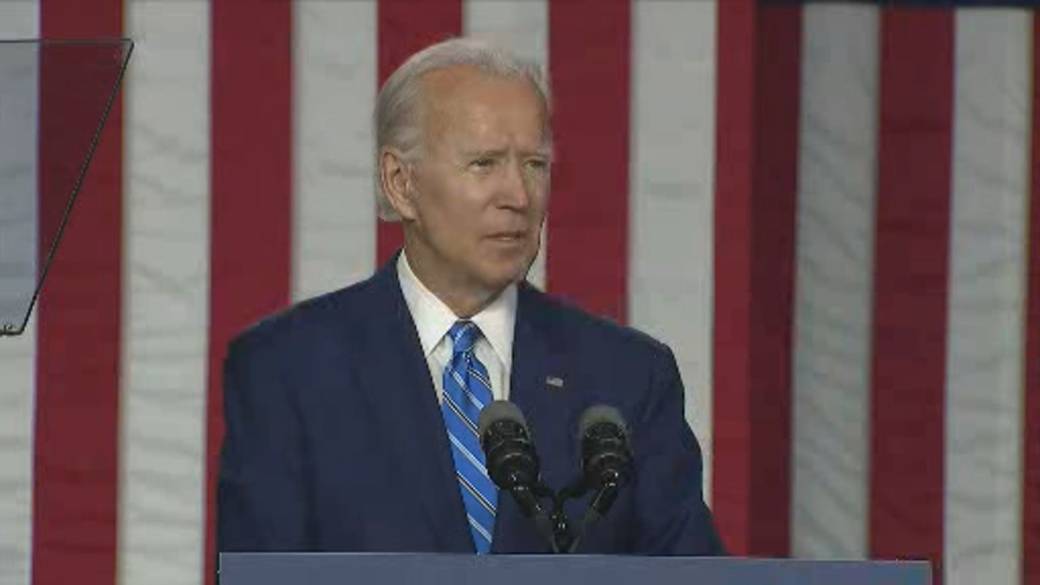 To encourage home ownership, the plan would create a $15,000 federal tax credit to help low-and middle-income families cover down payments on their first homes. It also pledges to build 1.5 million new homes and public housing units in hopes of addressing the affordable housing crisis that has hit many of the nation’s cities and disproportionately hurt people of colour.

Biden also said the Federal Reserve’s mission should be revised to specifically charge the central bank with addressing “persistent racial gaps” in economic opportunities and wealth, rather than a more general focus on maximum employment and stable pricing.

Asked about the possibility of a congressional study on the feasibility of federal reparations to descendants of enslaved Black people, senior campaign officials said Biden wouldn’t oppose it. But they defended Tuesday’s proposal as doing more to benefit Black Americans in the short term, saying, “He is not going to wait on a study to create change.”

The Democratic National Committee’s convention platform committee voted by a wide margin on Monday to keep language calling for legalization of marijuana nationwide out of the party’s platform.